Statement of the Guild

The ringing chamber is part of the Church, and as such, is consecrated to the service of Almighty God.

The bells are instruments of sacred music and are intended to announce hours of Christian worship, to give expression to Christian joy and to solemnise the moments of Christian Sorrow.

No society of men and women can combine together for a common object without some sacrifice of personal convenience for the common good.

Church bellringing, learnt and practised to God’s Glory, will like every other good work, bring its own reward.

A Short History of the Guild

Together, they were the main stay of the Hillingdon band until Grace’s death in 1974, aged 71 years. Fred continued to ring at Hillingdon until his death in 1990 and was Captain of the bellringers for 23 years.

Its fortunes have fluctuated, largely due to re­sidential changes of its members, but the long service of other members such as Jack Pratt, 60 years, Bill Honor 68, Bert Twinn and Bill Coles both over 45 years pulled the Guild through some of its bad patches.

A policy of regular recruiting maintained over the years kept up the strength of the band until the early 1990s when, in common with many churches with bells, recruitment became difficult.

With the tireless support of the current Tower Captain, Mike Palmer and his wife Trish, the guild has been resurgent in recent years with many new ringers joining the tower within the last two years. We are now regularly able to ring on eight and ten at all of our practices and Sunday Service Ringing 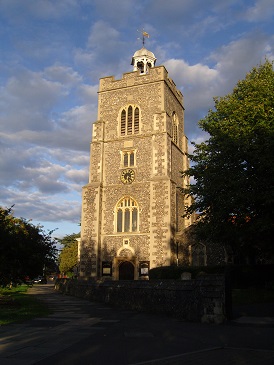